Here you will find a collection of books, articles, webinars, and more created by Active Food Safety or featuring us. Whether it's the state of the art book on Food Safety Management Systems or the latest webinar on foodservice in our new world, you can find it all here.

Below you will find state-of-the-art books on food safety systems written by our very own Dr. Hal King and other professionals in the food safety industry. Looks like something your establishment needs? Click through to pick one up today! 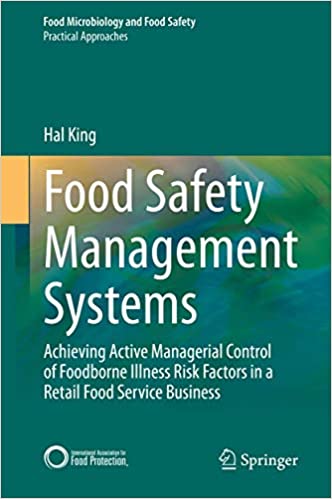 This foodborne disease outbreak prevention manual is the first of its kind for the retail food service industry. Respected public health professional Hal King helps the reader understand, design, and implement a food safety management system that will achieve Active Managerial Control in all retail food service establishments, whether as part of a multi-restaurant chain or for multi-restaurant franchisees. 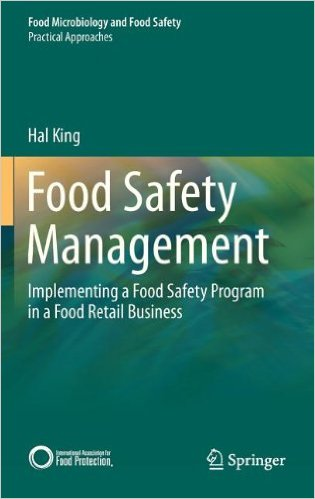 The goal of this book is to show how to build and manage a food safety department that is tasked with ensuring food safety within a food retail business.  The experiences of the author as the head of Food and Product Safety at Chick-fil-A will be used as the model. 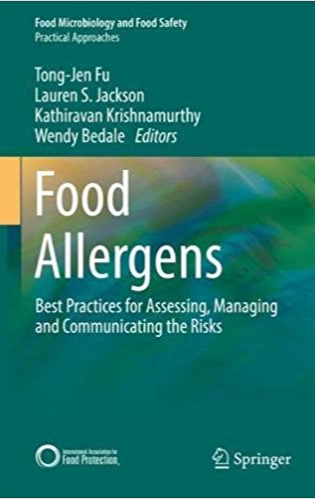 This volume identifies gaps in the assessment, management, and communication of food allergen risks. Chapters showcase best practices in managing allergen risks at various stages of the food chain, including during food manufacture/processing; during food preparation in food service, retail food establishments, and in the home; and at the point of consumption. 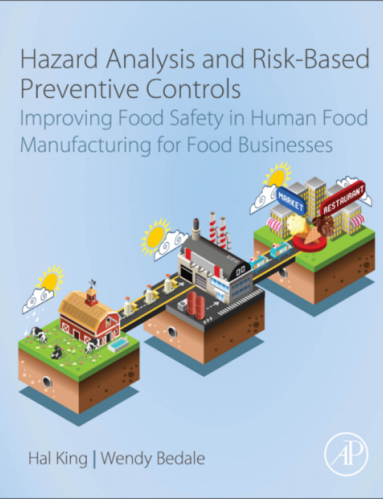 This book covers all aspects of PCHF, including the legislation's intent, applications to ensure safe food production, and resources to keep up-to-date on new food safety hazards and regulatory guidance. Written for food safety professionals and food business leaders, its emphasis on what the retail food industry needs to know about PCHF make it an indispensable resource for organizations buying food from companies required to demonstrate compliance with PCHF.

Active Food Safety in the news

Here you will find a collection of featured articles where Active Food Safety is mentioned. Click through to continue reading each article.

One of the most difficult challenges in the safe operation of a retail foodservice establishment is preventing employees from working while sick. The greatest risk (from both the hazard and probability) is due to employees working while sick with the infectious disease norovirus. In fact, the most common cause of foodborne illnesses in foodservice establishments in the United States, norovirus, occurs due to significant challenges to detect and then exclude all employees who are sick because...

Hal King honored for his contributions to food safety

Hal King, founder, and CEO of Public Health Innovations LLC, is this year’s recipient of the Food Safety Leadership Award from NSF International.NSF International, a global public health, and safety organization, announced King as this year’s recipient Wednesday at the 20th annual Food Safety Summit. The summit, at the Donald E. Stephens Convention Center in suburban Chicago, wraps up today.

Aside from the menu, food safety is arguably the biggest factor that underlines a restaurant’s success — or if done improperly, downfall. In this NRA Special Report edition of “On Foodable Weekly,” we are joined by three food safety champions: Hal King, president and CEO of Public Health Innovations, LLC; Mick Miklos, senior manager for program compliance at the National Restaurant Association; and Dave Crownover, product manager at ServSafe®.

For Dr. Hal King, longtime public health professional and food safety innovator, digging into the tough problems around keeping you and people all around the world safe from contaminated food has become his life’s work. Every day, Dr. King is living and breathing food safety in two roles that make up his professional life and have captured a huge piece of his heart.

Protect your restaurant against norovirus

Norovirus is the most common cause of acute nonbacterial gastroenteritis in the U.S. The winter months, or as some people call it, the cold and flu season, is a time of year to be especially aware of this potential threat to your customers and your business

As the pandemic coronavirus crisis unfolds, Active Food Safety has moved quickly to update EmergiProtect, its flagship food safety mobile application used by restaurant owners and managers. As we all know, the food service industry has been hit hard recently. As take-out and delivery service continues and as restaurants look to reopen their doors to the public in the future, proper food safety best practices are more important than ever to prevent the further spread of COVID-19.

The future of Food Safety

Here you will find a collection of featured articles by AFS Partners.

More than one in six people in the United States are poisoned by adulterated food each year, and more than 3,000 of them die, with the CDC estimating the numbers are actually 30 times higher when you consider under reporting and unconfirmed cases of disease.  These cases of preventable diseases cause many other impacts on the public health, including the burden of cost to health care and lost wages, and they also have a significant impact on the economy of the food industry.

The Need for a Glove-Use Management System in  Retail Foodservice

According to recent data from the U.S. Centers for Disease Control and Prevention (CDC), more than 60 percent of all the reported foodborne disease outbreaks in the United States are attributed to retail foodservice establishments. As reported previously, failures to handle and prepare food safely in these establishments are the primary contributing factors that lead to foodborne disease outbreaks.

Is It Time to Change How We Clean and Sanitize Food Contact Surfaces with Reusable Wiping Towels?

Each year, the U.S. Centers for Disease Control and Prevention (CDC) publishes a report summarizing domestic foodborne disease outbreaks based on the data collected by state, local, and territorial health departments. The 2017 report (which reviewed data up to 2015) identified restaurants, specifically those with sit-down dining, as the most commonly implicated locations associated with foodborne disease outbreaks.

Is It Time for a “Kill Step” for Pathogens on Produce at Retail?

The Food Safety Modernization Act (FSMA), described by the U.S. Food and Drug Administration (FDA) as the most sweeping reform of our food safety laws in more than 70 years, was signed into law by President Barack Obama on January 4, 2011. It aims to ensure the U.S. food supply is safe by shifting the focus from responding to contamination to preventing it. The law allows FDA to regulate through enforcement the prevention of food safety problems before rather than after they occur.

Below are featured webinars that partners at Active Food Safety have led or participated in, as well as webinars we have hosted. Want to develop a webinar for your clients? Contact us!

We are all in a storm and we need to right the ship.  Active Food Safety, LLC can help.  We have created a new advisory firm with new thinking to help you build resilience and gain the ability to prepare for this and future crisis – A new way of approaching the storm.
We have been in your shoes!  Now we have combined our decades’- long track record of experience and success to develop an innovative blueprint to manage food safety and public health risk in the entire organization.

Responding to COVID-19 & Preparing for What’s Next: An Interview with Public Health Expert Dr. Hal King

As the foodservice industry responds to the unprecedented global corona-virus outbreak, operators are doing everything they can to help keep staff and customers safe. This means operations teams are having to quickly deploy necessary changes to people management and staffing, revise many of their operating procedures and introduce new ones, and figure out how to quickly roll-out and ensure compliance with all of them, which becomes even more challenging as field teams are forced to limit travel.

How to Re-Open Your Restaurants Safely

Featuring Dr. Hal King, Managing Partner, Active Food Safety.  Dr. King is a public health professional who has worked in the investigation of foodborne and other disease outbreaks at the Centers for Disease Control and Prevention (CDC), performed funded research on causation and prevention of infectious diseases (Emory School of Medicine), and worked in the design and implementation of preventative controls for food safety hazards in the food industry (Chick-fil-A).  He is formerly the Director of Food and Product Safety at Chick-fil-A.

Breaking the Chain of Disease Transmission in Restaurants

Outsmart theTransmission of Norovirus with a New Foodservice Tool

Breaking the Chain of Disease Transmission in Restaurants

Podcasts and other media created by and featuring Active Food Safety will be collected here. Browse, bookmark, and listen!

Welcome to the Sani Professional® TripleTake Q&A — 3 questions, 3 answers each — with renowned food safety expert, Hal King, Ph.D. Hal is the founder and CEO of Public Health Innovations LLC, an ideation technology and consulting business, and has previously served as the Director of Food and Product Safety at Chick-fil-A Inc., Chairman of the National Restaurant Association Quality Assurance Executive Study Group, board member of the National Council of Chain Restaurants and the FDA and CDC Industry Partnerships, and President of the Georgia Association for Food Protection, an affiliate of the International Association of Food Protection.

Join Datassential's Marie Molde as she interviews food safety expert Dr. Hal King as they discuss the crisis at hand and how food safety has and will be affected. Topics such as how food is handled, limiting the spread of the virus, and how dining experiences will forever be changed following the pandemic are covered.

Food Safety Matters: That looks really clean, but it’s not

Dr. Hal King is the founder and CEO of Public Health Innovations, an ideation technology and consulting business. Hal is a public health professional who has worked in the investigation of foodborne and other disease outbreaks with the U.S. Centers for Disease Control and Prevention (CDC). He has also performed funded research on causation of diseases at Emory University.